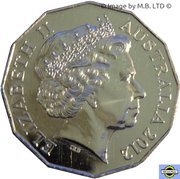 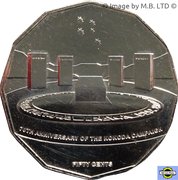 A depiction of the Isurava Memorial, the Owen Stanley Range in the background and the stars of the Southern Cross above.

The 70th anniversary of the Kokoda campaign is marked by this special issue NCLT 50c released by the Royal Australian Mint. The coin was issued in a crdit card sized coincard.

The Kokoda trail is a 96km single file trail overland through Papua New Guinea. It was the scene of many violent conflicts throughout 1942 between Australian armed forces and the Japanese army.