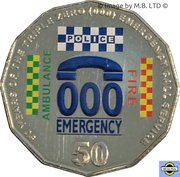 Commemorating 50 years of the triple zero emergency call service for fire, ambulance and police this 50c is pad printed in full colour and was released by the RAM in a credit card sized coincard.

Triple Zero (000) in Australia is similar to 911 in the USA and 999 in the UK. Aussies know that if they dial 000 (or 112 on a mobile), help is near. A free call from any phone, if you're involved in an emergency or need of help, an operator will direct your call to the appropriate police, fire, or ambulance needed for a speedy response.