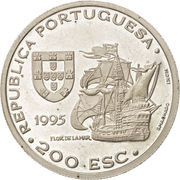 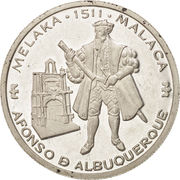 Portuguese coat of arms, and to the right, the Flor de la Mar, ship commanded by Albuquerque during the attack of Malacca, Malaysia

Standing portrait of Afonso de Albuquerque who seized Malacca in 1511. Behind, the ruins of the Porta de Santiago, of which only remains of the fortress remain he built then.

A member of this site wants to exchange it: NoIdea

Bullion value: USD 16.01 Search tips
This value is given for information purpose only. It is based on a price of silver at 653 USD/kg. Numista does not buy or sell coins or metal.