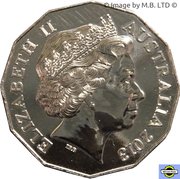 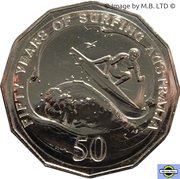 Image of a surfer and wave in a wave tunnel border
in the background, flying birds in the sky

The RAM released this NCLT 50 cent coin to celebrate 50 years of Surfing Australia & issued the coin in an unusual coincard that was shaped like a surfboard.

With surfing so ingrained in Australian culture as a sport and pleasure activity, as well as celebrating the 50th Anniversary of Surfing Australia the Royal Australian Mint pressed a coin in tribute to this wonderful sport and in celebration of this great milestone.