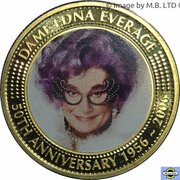 Struck by the Perth Mint but issued exclusively by Australia Post in a PNC issued 24/10/2006.

This coin marks 50 years of satirist and actor Barry Humphries AO in his alter ego as Dame Edna Everage.