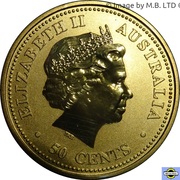 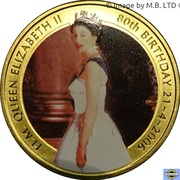 This coin was struck by the Perth Mint and was issued exclusively in an Australia Post PNC issued 19/4/2006.

This coin was struck to mark the 80th birthday of Queen Elizabeth II and the 50th anniversary of the unveiling of Pietro Annigoni's portrait of Her Majesty as shown on the reverse of the coin.