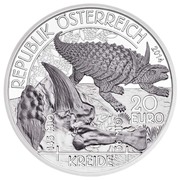 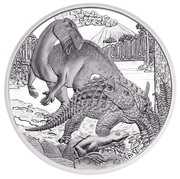 The remains of a pterosaur and a raptor discovered in a coal mine south of Vienna in 1855 and the the timeline of cretaceous (145 Mio - 66 Mio).

A typical landscape from the period, in which a zalmoxes protects its eggs from a hungry struthiosaurius austriacus.

Struthiosaurus (Latin struthio = ostrich + Greek sauros = lizard) is one of the smallest known and most basal genera of nodosaurid dinosaurs, from the Late Cretaceous period (Santonian-Maastrichtian) of Austria, Romania, France and Hungary in Europe. It was protected by body armour. Although estimates of its length vary, it may have been as small as 2.2 metres (7.2 ft) long.

Bullion value: 15.60 USD Search tips
This value is given for information purpose only. It is based on a price of silver at 867 USD/kg. Numista does not buy or sell coins or metal.