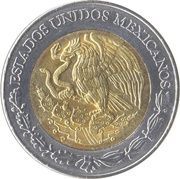 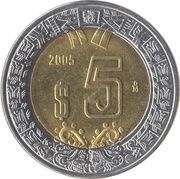 The national emblem/shield of Mexico in sculpted relief--a Mexican golden eagle perched on a prickly pear cactus devouring a snake above a half-wreath of oak and laurel below, and the legend “ESTADOS UNIDOS MEXICANOS” forming the upper semicircle.

In the center of the coin to the left, the symbol "$", and to the right, the face value, five "5"; top center, the mint year; to the right of the center, the mark of the Mint of Mexico “Mo” As the key motif, a stylized image of the Ring of the Serpents of the Aztec sun stone.

2008 - 2010 mintages are considerably lower because those were the years the commemorative coins were released (Centennial of the Revolution and Bicentennial of Independence series).  The mintage for these standard 5 Pesos coins was reduced to nearly a tenth of the normal years, making them more difficult to find and usually more expensive than the commemorative coins of the same years.

Varieties exist:
Obverse: Larger vs. smaller design features, the thickness of the font on Obv.,  with and without decoration of Serpant's tales above date and '5' of denomination on Rev. 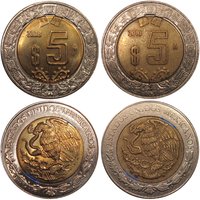