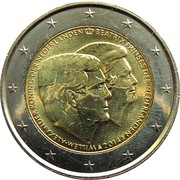 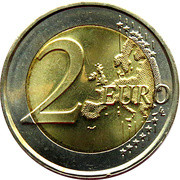 The inner part of the coin depicts the effigies of both the King Willem-Alexander and the former Queen Beatrix. At the left, in a semi-circle, the inscription ‘WILLEM-ALEXANDER KONING DER NEDERLANDEN’ and at the right, in a semi-circle, the inscription ‘BEATRIX PRINSES DER NEDERLANDEN’. Between the two inscriptions, at the top, the crown symbol and at the bottom the mint master mark, the mint mark and in between the year of issuance ‘2014’. The coin’s outer ring bears the 12 stars of the European Union.