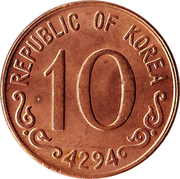 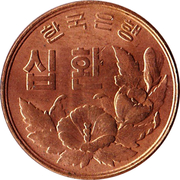 Value and date per the Korean calendar.

Two of the three coins namely 10 & 50 hwan coins were revalued as 1 & 5 won and were in circulation (legal tenders). These were the only two coins till 1966.

Coins were struck under Second or New Won from 1966 onwards.

The U.S. Mint has published actual Mintage numbers by year (and the year shown on coin):