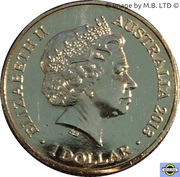 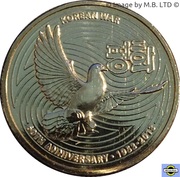 60th Anniversary of the Korean War

A Dove in Flight & Korean word for Peace

This NCLT Aluminium-bronze $1 coin produced by the Royal Australian Mint commemorates the 60th anniversary of the end of the Korean War. Its reverse, designed by Mint designer Aaron Baggio, symbolizes the signing of the armistice agreement between communist and United Nations leaders in 1953. The depiction of a dove in flight and the word ‘Peace’ in Korean is a reminder of the ultimate goal on the still-troubled peninsula. The coin was issued in a tall coincard. 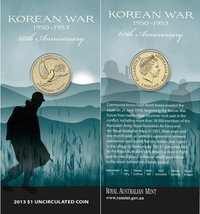 A Fine Silver (.999) proof version of the coin was also released in a capsule in a plush case.