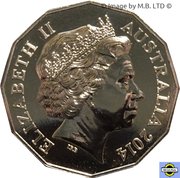 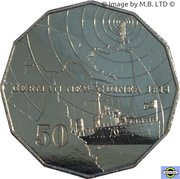 The Royal Australian Mint issued this NCLT coin as a tribute to those who contended with the German colony of New Guinea. This conflict marks the earliest example of unity among Australian volunteers – and the first Australian lives to be claimed by the War. This coin is part of the "Australians at War" 18 coin series being issued individually.  Six coins were issued in 2014, Six in 2015 and the final Six in 2016.