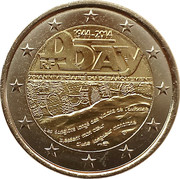 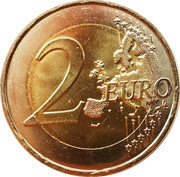 In the coin’s central field the word D-DAY is written in such a way as to depict a landing craft and a tank gun barrel. The years 1944-2014 appear above the tank gun, with the inscription ‘70e anniversaire du débarquement’ (70th anniversary of the landings) further down. The distinctive footprints left by the boots worn by American, British and Canadian troops are gradually disappearing in the sand, washed away by a wave. The words of a poem by Verlaine used as a code for the start of the landings are engraved on the wave: ‘Les sanglots longs des violons de l’automne blessent mon coeur d’une langueur monotone’ (the long sobs of the violins of autumn wound my heart with a monotonous languor). The coin’s outer ring bears the 12 stars of the European Union.