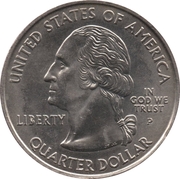 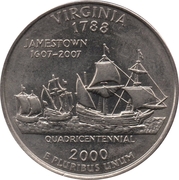 A rendering of the arrival in 1607 of the three ships, Susan Constant, Godspeed and Discovery to Jamestown, the first permanent English settlement, is accompanied with the legends "JAMESTOWN 1607-2007" and "QUADRICENTENNIAL", the state's name ("VIRGINIA"), the date of its admission into Union ("1788") and the motto "E PLURIBUS UNUM"