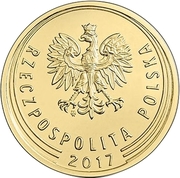 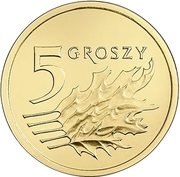 Polish eagle (state emblem) with stylized rings intersecting at top and split at bottom by date.

Ewa Tyc-Karpińska (born in 1941) is a Polish medallist, designer of Polish coins

Milled and plain alternately (four each)

Design differences between the two versions:

» Buy coins from Poland at eBay