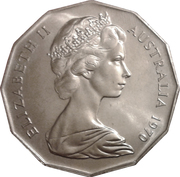 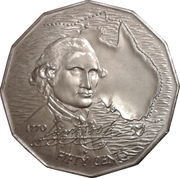 Bust of Captain Cook at left, map of Australia at right.

The Royal Australian Mint issued this 50 cent coin, the first commemorative coin of the decimal era, in 1970 to celebrate the bicentenary of the navigation of Australia’s east coast by Captain James Cook. It was included in the UNC and Proof Year sets for 1970.

There were 556,888 coins issued as a red cased specimen as shown below. These were issued for 60 cents from banks and the RAM. 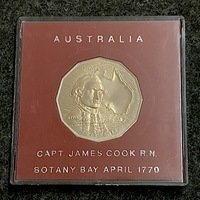 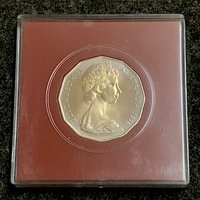 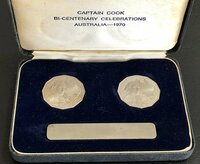 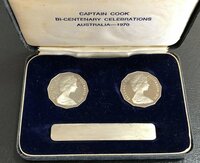 In 1989 The RAM issued a stunning re-strike of the coin in the "Masterpieces in Silver Set" for that year. However, it had the Raphael Makleouf 3rd Portrait of Queen Elizabeth II on the Obverse.

This image shows the two different orientations that the number 7 can be on the date on this coin. 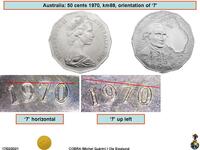