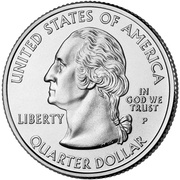 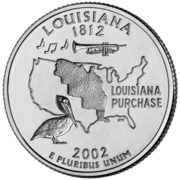 An image of the pelican, Louisiana's state bird, a trumpet with musical notes, and the outline of the Louisiana Purchase territory with and engraver's initials under it.

Translation:
Lousiana
1812
Louisiana
Purchase
JM
2002
Out of Many, One