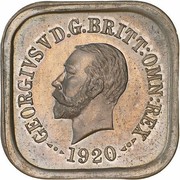 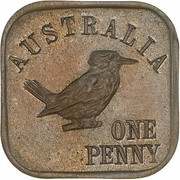 Uncrowned head of King George facing left; circle legend with date below with ornamental stop before and after the date

This perversely unknown type caused a sensation when it was discovered during a stocktake at the Science Museum of Victoria in the 1970s. The two known examples are believed to be from the former property of H.M. Le Souef, the late Deputy Master of the Melbourne Mint who left much of his collection to the museum.
"Ref" 2017 Pocket Guide to Australian Coins and Banknotes By Greg McDonald, 23rd Edition, p105