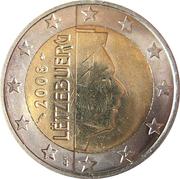 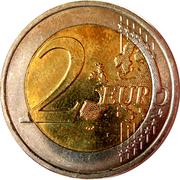 On the right side, a geometrical portrait of His Royal Highness Grand Duke Henri is accompanied, on the left side, with the lettering "LËTZEBUERG" and encircled by the twelve stars of Europe

A map, next to the face value, shows the states of the European Union

This coin has been minted by several countries under the leadership of several engravers as follows: