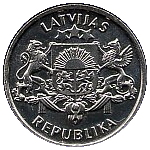 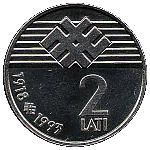 75th Anniversary of Proclamation of the Republic of Latvia

The large coat of arms of the Republic of Latvia is placed in the centre. The inscription LATVIJAS and REPUBLIKA, each arranged in a semicircle, are above and beneath the central motif, respectively.

The reverse is horizontally divided into two parts. An ethnographic motif on the background of seven horizontal lines is centered in the upper part. The numeral 2, with the inscription LATI (lats) beneath it, is placed on the right side of the lower part; the years 1918 and 1993 are inscribed on the left side along the edge of the coin.

Smooth with two inscriptions LATVIJAS VALSTS 75 GADI (the 75th anniversary of the state of Latvia), separated by rhombic dots.