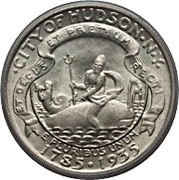 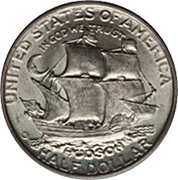 An image recalling the seal of the city of Hudson on the obverse. The god Neptune sits backward on a whale while holding his trident. A mermaid appears to the left, blowing a conch shell. A banner above the image reads “Et Decus Et Pretium Recti” (Both the Honor and Reward of the Righteous)

Translation:
ET DEGUS ET PRETIUM PECTI
Both the Honor and Reward of the Righteous

Henry Hudson’s ship, the Half Moon. A somewhat cartoonish crescent moon appears to the left, implying the name of the ship.

Lettering:
UNITED STATES OF AMERICA
IN GOD WE TRUST
HUDSON
HALF DOLLARั

The Hudson Sesquicentennial Half Dollar was issued to celebrate the 150th anniversary of a small community in New York, named for the famous explorer Henry Hudson. The issue became another source of controversy after seemingly few of the coins were offered for sale directly to the public. The majority of the coins were sold to dealers who resold them at inflated prices.

Hudson, New York had just 14,000 residents at the time, so it seemed unusual to issue a commemorative coin for the anniversary of its founding. Coins were generally issued for occasions of national importance, but this classification became increasingly broad within this era. A small mintage of just 10,000 pieces was indicated within the authorizing legislation.

The designs for the coin were prepared by Chester Beach, who earlier had designed the 1923 Monroe Half Dollar and 1935 Lexington-Concord Half Dollar.

Members from this site want to exchange it: SteveV, eljunquito52