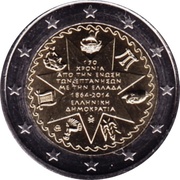 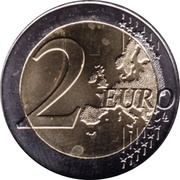 150th Anniversary of the Union of the Ionian Islands with Greece

The inner part of the coin depicts a seven-pointed star inscribed in Greek with the words: ‘150 YEARS SINCE THE UNION OF THE IONIAN ISLANDS (EPTÁNISA) WITH GREECE 1864-2014’, the name of the issuing country ‘HELLENIC REPUBLIC’ and the mint mark of the Greek State Mint. The spaces between the points of the star feature the symbols of the Ionian Islands. The entire design is encircled in a decorative stylised wave motif. The coin’s outer ring bears the 12 stars of the European Union.

The unification of the Ionian Islands with Greece was the first expansion of the modern Greek State’s borders.
After centuries of foreign rule under the Venetians, French, Russians and British, the islands became an
integral part of the national territory in 1864, when the British ceded them to Greece on the occasion of the accession of King George I to the Greek throne.
The coin was issued in bankrolls, in Proof quality along with the proof year set and in BU quality on a coincard blister. 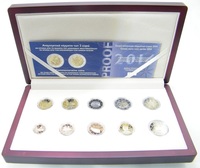