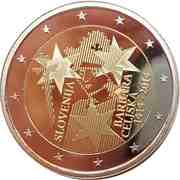 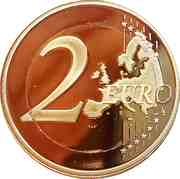 600th Anniversary of the Crowning of Barbara of Celje

The central image of the coin shows, with lined pattern, the portrait of the Queen Barbara of Celje with her sceptre. On the image are placed three typical six-pointed stars of Celje counts. On the left side of the portrait is the inscription ‘SLOVENIJA’ and on the right side the inscription ‘BARBARA CELJSKA’ and the years ‘1414-2014’. The coin’s outer ring depicts the 12 stars of the European flag.