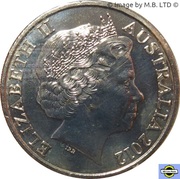 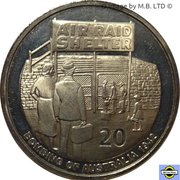 Shores Under Siege - Bombing of Australia

Australian couple walking towards an Air Raid Shelter, with three men and a young girl holding a teddy bear in the background

This Copper-nickel NCLT 20 cent coin was released as part of a three coin set by the RAM to remind Australia of previous war times when Australian shores were under attack from Japanese forces 70 years ago. This coin is the Bombing of Australia Air Raid Shelter 20 cent and was included in the set with 1 other 20 cent coin & a 50 cent coins. The set was called "Shores Under Siege".