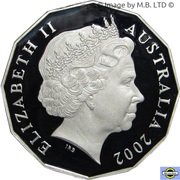 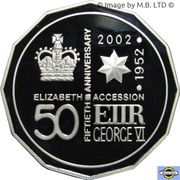 This Fine Silver (.999) coin was released by the RAM in 2002 to mark the 50th anniversary of Queen Elizabeth II's Accession or Golden Jubilee. It was placed in a capsule presented in a red velvet box. Each box was individually numbered with a certificate.

The coin was originally intended to circulate, but this decision was overruled after advice from the Treasury that there were enough 50 cent pieces already in circulation.

However 32,102 Copper Nickel versions of this coin were released in a PNC by Australia Post. These are very hard to find and are usually at a premium price.

Bullion value: 14.86 USD Search tips
This value is given for information purpose only. It is based on a price of silver at 816 USD/kg. Numista does not buy or sell coins or metal.