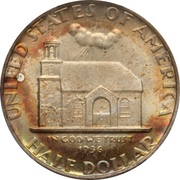 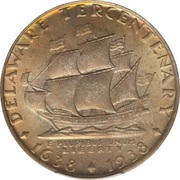 Old Swedes Church, which was dedicated in 1699. Cloud and rays above the church.

Lettering:
United States of America
In God We Trust
1936
Half Dollar

The ship Kalmar Nyckel, which brought Swedish settlers to the country.

A commemorative coin was approved to mark the occasion of the 300th anniversary of the landing of the Swedes in Delaware. Known as the Delaware Tercentenary Half Dollar, this issue is associated with a confusing array of dates. The date on the obverse is 1936, the coins were struck in 1937, and the anniversary date on the reverse is 1938.

The designs for the coin were selected through a competition judged by United States Mint Chief Engraver John R. Sinnock and sculptor Robert Tait MacKenzie. The winning entry was submitted by Carl L. Schmitz.

The 1936 Delaware Half Dollars were distributed by the Delaware Swedish Tercentenary Commission for $1.75 each. A minimum production of 25,000 pieces was specified under the authorizing legislation. This entire number was struck at the Philadelphia Mint. Eventually, 4,022 unsold pieces were returned to the mint for melting.

In 1938 Sweden also issued a commemorative 2 kroner coin for the tercentenary. The link to that coin is below.