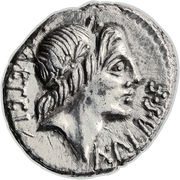 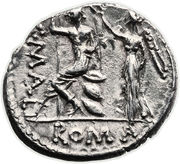 Laureate head of Apollo right, sometimes a star or a crescent below.
Two moneyers marks counterclockwise, one before and one behind.
Border of dots.

Roma seated left on pile of shields, holding sword in left hand and spear in right hand, crowned by winged Victory standing behind.
Moneyer mark counterclockwise in left field with AL in monogram, ROMA in exergue.
Border of dots.

The gens Caecilia was a plebeian family at Rome. Members of this gens are mentioned in history as early as the fifth century BC, but the first of the Caecilii who obtained the consulship was Lucius Caecilius Metellus Denter, in 284 BC.

The gens Postumia was a patrician family, and as such always remained unadopted by any plebeian family. It was divided into several branches, the noblest of which, as recorded by name on Roman denarii, was the Albini.

The gens Poblicia was a plebian family, but of consular rank.