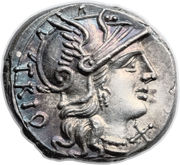 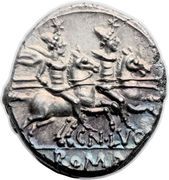 The dioscuri, Castor and Pollux, on horseback galloping right, cloak floating behind, each holding horizontal lance.
Part of moneyer mark in field under the horses.
ROMA in exergue.

The gens Lucretia was a prominent family of the Roman Republic; originally patrician, the gens later included a number of plebeian families. The Lucretii were one of the most ancient gentes, and the wife of Numa Pompilius, the second King of Rome, was named Lucretia. The first of the Lucretii to obtain the consulship was Spurius Lucretius Tricipitinus in 509 BC, the first year of the Republic.