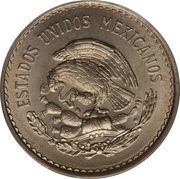 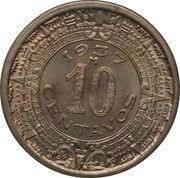 The Mexican coat of arms: a Mexican golden eagle perched on a prickly pear cactus devouring a rattlesnake. At the base there is a holm oak (encina) branch on one side and a laurel branch on the other.

The outer circles of the Mexica, or Aztec, Sun Stone, with the year, mintmark (M), and 10 Centavos, in the center.