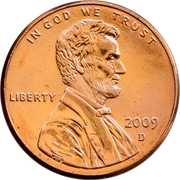 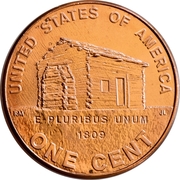 Log Cabin with the birth year of Lincoln (1809) below

Translation:
United States of America
RM JL
Out of Many, One
1809
One Cent

Jim Licaretz is a graduate of the Pennsylvania Academy of the Fine Arts in Philadelphia. He returned to the United States Mint as a Medallic Sculptor in 2006, a position he first held in the 1980s.