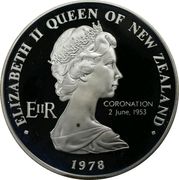 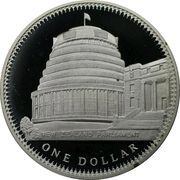 25th anniversary of the Coronation of Elizabeth II

The east view of the "Beehive", the new executive wing of the Parliament Buildings, Wellington, with the main steps of the present House of Representatives building to the right. The border pattern is repeated 125 times, representing the continuous years of Representative Government in New Zealand since 1854.

This crown-sized silver proof dollar coin commemorates the 25th anniversary of the coronation of Elizabeth II on the 2nd June, 1953.
It was struck by the Royal Canadian Mint. It was issued in a plush case and in the annual year proof set.

Bullion value: 21.44 USD Search tips
This value is given for information purpose only. It is based on a price of silver at 849 USD/kg. Numista does not buy or sell coins or metal.