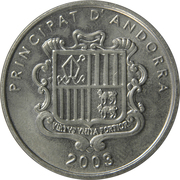 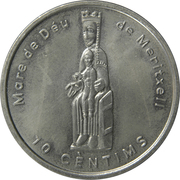 Wood carving of Our Lady of Meritxell

Translation: Our Lady of Meritxell

The Sanctuary of Our Lady of Meritxell is a basilica located in the town of Meritxell, in the Andorran parish of Canillo. It worships the Virgin of Meritxell, patron saint of the Principality of Andorra.
The original image of the sculpture was a Romanesque carving from the 12th century whose shoes were popularly known as the "Mare de Déu dels Esclops" and which was destroyed in the fire of 1972. The current image has been referred to as faithfully as possible is located at the new Sanctuary of Meritxell