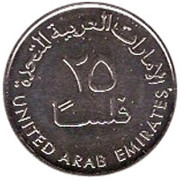 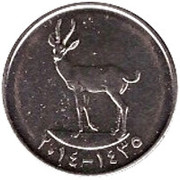 Denomination in Arabic characters surrounded by name of the country

Gazelle facing left, date below. Probably the sand gazelle or goitered gazelle (Gazella subgutturosa marica), one of the 2 species found in the UAE