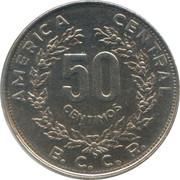 NOTE: size and space between letters varies in mintages. outer rim of Coat of Arms slightly different. versions with normal and small ship