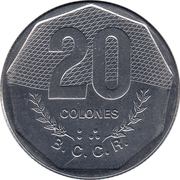 The arms of Costa Rica (seven stars representing the seven provinces, three extinct volcanoes for the three mountain ranges, two ships symbolizing the country's geographical situation between the Atlantic and Pacific ocean and sunrise on the left), the date below, the country name above, all within a nonagonal rim

The value above coffee branches, ribbon behind value and initials of the "Banco Central de Costa Rica" along with the value in Braille, all within a nonagonal rim