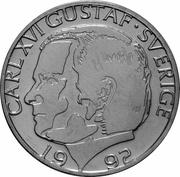 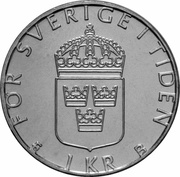 Stylized portrait of King Carl XVI Gustaf facing left with his name, the country name, and the date

Crowned lesser coat-of-arms of Sweden, State motto in Swedish above; denomination below with mintmark at left and Riksbank governor's initial at right.

Translation: For Sweden - With the Times

Lars Englund (born May 6, 1933 in Stockholm) is a Swedish sculptor and painter active since 1953.