Depiction of the shape of Australia with the Southern Cross Stars superimposed.

Lettering:
ONE DOLLAR
2002
Year of the
Outback

The RAM released this Aluminium-bronze $1 coin into general circulation in 2002. This year was designated as the "Year of the Outback" which celebrated that part of Australia that is so internationally famous (but actually lived in by very few Australians). There were more than 7000 celebratory activities held Australia wide during the year.

Other releases of this coin were as follows:-
Coins with (B), (M) & (S) Counterstamps were released at the relevant ANDA Shows in coincards during the year.
An UNC coin with "C" Mintmark was available from the Public Gallery Press at the RAM for a fee of $2. 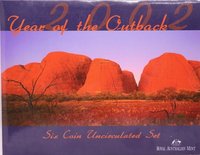