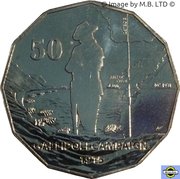 Map of ANZAC Cove
Ships, landing craft, and an Australian soldier wearing slouch hat quietly reflecting his thoughts on the shore of Gallipoli

The Royal Australian Mint issued this Copper-nickel 50 cent NCLT coin as a tribute to the ANZAC's who served at Galipolli in WW1. On 25 April 1915, Australian and New Zealand troops came ashore on Turkey’s Gallipoli peninsula as part of a wider British effort to seize control of the Dardanelles straits. After the landing, the fighting ground to a stalemate, with Turkish forces holding the ridges of the precipitous terrain for the entire eight-month campaign. This coin is part of the "Australians at War" 18 coin series being issued individually.  Six coins were issued in 2014, Six in 2015 and the final Six in 2016. 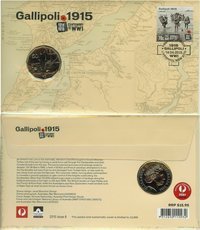