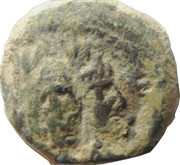 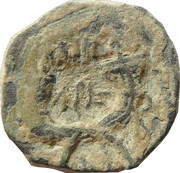 Crossed cornucopias. With letter in between them for the king and queen names.

Aretas had two wives. The first was Huldu to whom he was already married when he became king. Her profile was featured on Nabataean coins until CE 16. After a gap of a few years the face of his second wife, Shaqilath, began appearing on the coins.
(Jane Taylor (2001). Petra and the Lost Kingdom of the Nabataeans. I B Tauris. p. 69. ISBN 9781860645082.)
During the reign of Aretas IV, the Nabataeans achieved their pinnacle of cultural and economic development. Generally maintaining a position of neutrality for the sake of trade, relations with neighbors were mostly good. However, a number of skirmishes with the Judaeans compelled Aretas to marry his daughter Phasaelis to Herod Antipas, the son of Herod the Great. This relieved tensions for a while, until Herod Antipas fell in love with his brother's wife Herodias in AD 27, and divorced Phasaelis for her sake. This is the soap opera that John the Baptist denounces in Mark 6, thereby earning a lost head.
(Cited from: https://www.cointalk.com/threads/aretas-iv.225325/)

ARETAS IV  reigned from 9 B.C. to 40 of the common era. His full title, as given in the inscriptions, was "Aretas, King of the Nabatæans, Friend of his People." Being the most powerful neighbor of Judea, he frequently took part in the state affairs of that country, and was influential in shaping the destiny of its rulers. While on not particularly good terms with Rome—as intimated by his surname, "Friend of his People," which is in direct opposition to the prevalent φιλορώμαις ("Friend of the Romans") and φιλόκαισαρ ("Friend of the Emperor")—and though it was only after great hesitation that Augustus recognized him as king, nevertheless he took part in the expedition of Varus against the Jews in the year 4 B.C. (see Archelaus and Varus), and placed a considerable army at the disposal of the Roman general. It appears, however, that his relations with the Jews, or at least with the reigning family, became later more friendly; and Herod Antipas married his daughter. This marriage, however, led to a war between Aretas and Herod; the latter having conceived a fatal passion for his sister-in-law, Herodias, and having repudiated his wife, thus aroused the hatred of the Nabatæan king. Soon afterward there arose a quarrel between Aretas and Herod concerning the boundary of Gilead, which led to open warfare. In a battle between the two armies, Herod Antipas was defeated, and would have been completely overthrown but for the interference of Rome: it was against Roman interests to permit the spread of the power of Aretas. The emperor Tiberius commanded Vitellius, governor of Syria, to punish Aretas for his independent action. On account of the emperor's death (37), however, his order was never carried out.

Aretas IV. is probably identical with the Aretas whose governor at Damascus attempted to imprison Paul the apostle while the latter was on his missionary journey (II Cor. xi. 32). Since in a parallel passage (Acts ix. 23 et seq.) the Jews of Damascus are mentioned as lying in wait for Paul, it is very probable that Aretas made the attempt to capture Paul at the request of the Jews. From this it follows that the Jews must have been influential in the Nabatæan kingdom; otherwise the Nabatæans would have been careful to avoid any interference with Paul, who was a Roman citizen. http://www.jewishencyclopedia.com/articles/1752-aretas

» Buy coins from the Nabataean Kingdom