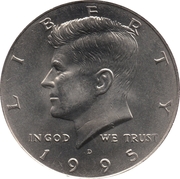 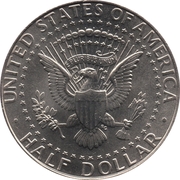 Portrait of John F. Kennedy to the left and the date below

Modified presidential seal of the United States of America (a shield (with vertical stripes) on the chest of an American eagle. The eagle holds an olive branch on its right talon and a bundle of thirteen arrows on its left, and a scroll with "E PLURIBUS UNUM" in its beak with a circle of stars surrounds the eagle)

Translation:
United States of America
Out of Many, One
FG
Half Dollar

Gilroy Roberts monogram, which some confuse for a hammer and sickle, appears on the truncation.

Because of low demand, no Half Dollars were struck for general circulation in 1987 and again from 2002 to 2020. During this period the coin could be found in mint sets or purchased from the Mint in rolls and bags, at a premium above face value. Starting in 2021, the Federal Reserve resumed ordering these coins for general circulation.