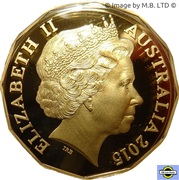 Stunning gold-plated 50c coin with a beautiful new design. The coin’s signature dodecagon shape is arranged into a ‘honeycomb’ image, symbolising the industrious hive at the Royal Australian Mint

This coin was manufactured in three different versions. As a plain Copper-nickel coin as part of the annual UNC mint set , a coloured version in two different coincards, one of them for the WMF Berlin Money Fair. Finally in stunning Gold Plate as seen here in the annual Proof Year Set for 2015.