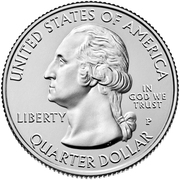 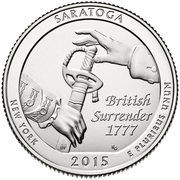 This reverse design depicts a close-up of the moment General John Burgoyne surrendered his sword to General Horatio Gates, a turning point many believe marked the ‘beginning of the end of the American Revolutionary War.’

Translation:
Saratoga
British
Surrender
1777
BF RG
New York 2015 Out of Many, One