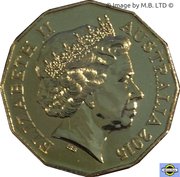 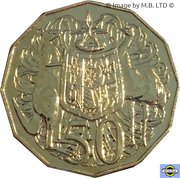 50th Anniversary of the Opening of the Royal Australian Mint

The Royal Australian Mint released this Gold Plated (.999), well loved 12 sided Australian 50 cent coin as an NCLT issue to commemorate 50 years since the RAM opened in 1965.
The coin was released in a special Open Day Coincard at the RAM  on 21st February 2015

And also in a credit card sized coincard  for general sale.