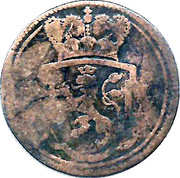 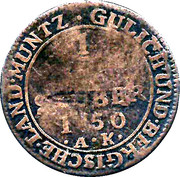 Gerhard VII, Duke of Jülich-Berg (c. 1416 – 19 August 1475) was the son of William VIII of Jülich, Count of Ravensberg and Adelheid of Tecklenburg. Gerhard was the second duke of the combined Duchy of Jülich-Berg but the 7th Gerhard in the House of Jülich.

Upon his father's death in 1428, Gerhard became Count of Ravensberg. In 1437, his uncle Adolf died without heirs and Gerhard inherited his title as Duke of Jülich-Berg. Gerhard continued his uncle's fight for the dukedom of Guelders, supported by King Albert II of Germany. In 1444 he won the Battle of Linnich but was unable to prevail in his fight for Guelders and ultimately sold his claim to Burgundy and acquired Blankenheim-Löwenberg and Heinsberg from Guelders. He was increasingly unable to govern his territories after 1461. His spouse Sophie of Saxe-Lauenburg then wielded regency for him.

A member of this site wants to exchange it: coincollect

» Buy coins from the Duchy of Jülich-Berg