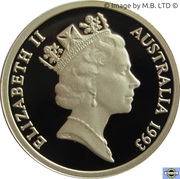 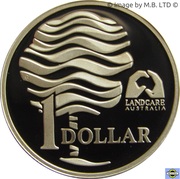 Depiction of a tree on the left formed from undulating bands to signify water. To the right the Landcare Australia logo of clasping hands forming a map of Australia.

This Silver (.925) Proof Landcare coin was released in two different versions as seen here.
The general proof cased version had a mintage of 20,000 and had the normal interrupted edge reeding. 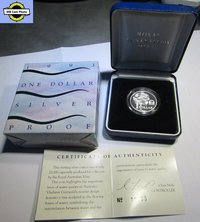 A different longbox cased version, mintage 5,000, was released at the 1993 Brisbane ANDA Show that had full edge reeding/milling. 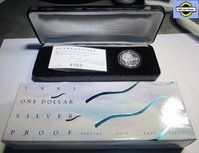 In an effort to promote care of the environment and natural resources the Australian government initiated the Landcare program. In 1993 in support of this initiative the RAM released the Landcare commemorative dollar. Initially intended as a collector only coin a shortage of dollar coins in circulation resulted in the RAM using the Landcare dollar dies, (minus a mintmark), minting nearly 20 million of the aluminium-bronze coins for release into circulation.

The aluminium-bronze coin version of the coin was also included in the annual Uncirculated Set and Proof Set.
It was also issued in the very first Baby Uncirculated Mint Set.
The coin was also released with a "C" mintmark at the Public Press in Canberra, and "M" & "S" Mintmarks on a mobile press at Royal Shows in Melbourne & Sydney.

Bullion value: 8.87 USD Search tips
This value is given for information purpose only. It is based on a price of silver at 835 USD/kg. Numista does not buy or sell coins or metal.