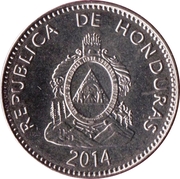 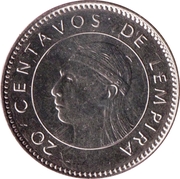 Honduran coat of arms: the triangle Coat of Arms of the Central American federation with a volcano between two towers in an oval. Behind it are a sun and a rainbow. On the oval are two cornucopias and a quiver of arrows. Under the oval is a landscape with oak and pine trees, and mining equipment.

Portrait of Chief Lempira (without feathers) facing left within a circle.

Translation: 20 Centavos of a Lempira

Lempira, the present currency of Honduras, was introduced in 1931 replacing the Peso. The Lempira is divided into 100 Centavos.

The currency is named after Lempira, a chieftain of the indigenous Lenca people, who waged war against Spanish occupation of the country during 16th century. He is revered as a national hero.

The image on the reverse of this coin is of Lempira.