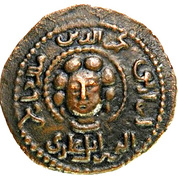 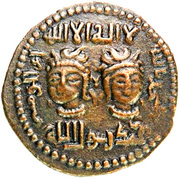 Two diademed male heads facing, but turned slightly away from one another
above la ilah illa allah, below muhammad rasul allah, at right upwards al-mustanjid billah,
at left downwards amir al-mu’minin
“no god but God Muhammad is the messenger of God, al-Mustanjid billah, Commander of the Faithful”

This is the last of the copper dirhams struck by Najm al-Din Alpi, which must have been issued in very large numbers and circulated all through the latter years of his reign, because it is by far the most commonly found.

It is the first coin of the Artuqids of Mardin on which an Abbasid caliph is named, in this case al-Mustanjid billah (555-566 H/1160-1170 AD), who was the first for over two hundred years to restore some real political and military power to the caliphate. It is interesting to note that Alpi’s cousin. Fakhr al-Din Qara Arslan, the ruler in Hisn Kayfa, also recognized the caliph on his coinage at the same time.

This is also the first issue of the Artuqids of Mardin to bear the words of the kalima, with la ilah illa allah above, and muhammad rasul allah below the two heads on the obverse.

Once again, the two heads, separated by a dot (rather than a star), is a representation of Gemini. The portraits may be derived from a Byzantine coin bearing the busts of the Emperors Justin II and Tiberius II. While the head on the reverse certainly alludes to Virgo, this one resembles the Gorgon head of Medusa, who, while beautiful and enticing, could destroy those who looked at her. Gemini is the “day house”, or domicile, of the planet Mercury and Virgo is the planet’s “night house”.

The figures relate once more to the theme of the Day House of Mercury and the Night House of Virgo, which is repeated on Alpi’s coinage with ever increasing sophistication and astrological imagery.

» Buy coins from the Artuqids of Mardin