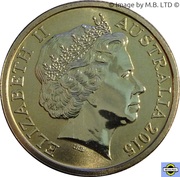 The coin shown above is the (S) Sydney Counterstamped version

The RAM also released a Fine Silver (.999) Proof version of the coin in a plush box.

Members from this site want to exchange it: ybigdan, brismike