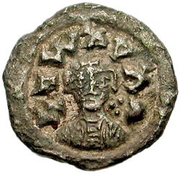 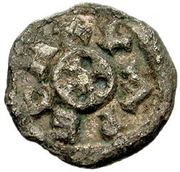 Cross with gilt center, within a circle.

Translation: "By the grace of Christ".

Lettering in Ge'ez and Greek languages.

Aksum was on the maritime trade route between the Roman Empire, which became the Byzantine Empire in late 6th century, and India. This coin seems to be compatible with the Roman-Byzantine Half-Siliqua, created after the Roman coinage reform of Constantine I and remaining after the Anastasius reform replacing the Roman system by the Byzantine system.

Bullion value: 0.66 USD Search tips
This value is given for information purpose only. It is based on a price of silver at 861 USD/kg. Numista does not buy or sell coins or metal.