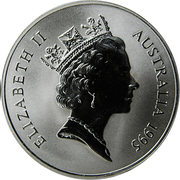 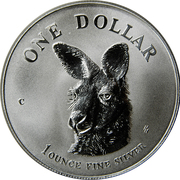 Produced in frosted uncirculated finish the coin is the third release in the Royal Australian Mint's Kangaroo Coin Series which began in 1993.
The reverse design of this one Troy Ounce coin celebrates Australia's best known animal, the Kangaroo, it has the 'C' mintmark incorporated into the design.

A member of this site wants to exchange this coin: Don pep

Bullion value: 18.00 USD Search tips
This value is given for information purpose only. It is based on a price of silver at 569 USD/kg. Numista does not buy or sell coins or metal.